Varroasis is the only disease that attacks adult bees and bee colonies, while all other diseases and pests attack only adult bees or only bee colonies. The disease is caused by the pest-parasite in the form of Varroa jacobsoni which also attacks the bee brood and adult bees, so it is very dangerous when it appears on a larger scale.

The danger is great in the initial stage of disease development, bee colonies develop and live almost normally, so that beekeepers practically do not notice it, and when it spreads then it makes a real devastation in the apiary, and it happens that completely destroy a large number of bee colonies, and sometimes all of them. When beekeepers notice that there is a lot of honey in the hive, even broods, but that there are no bees or there are very few of them on one, two, at most three frames, it is a sign that varroa is present. The rest of the bees in the hive are so damaged by varroa that, when the necessary measures are taken to treat them, there are usually no results. In such cases, huge damages occur. 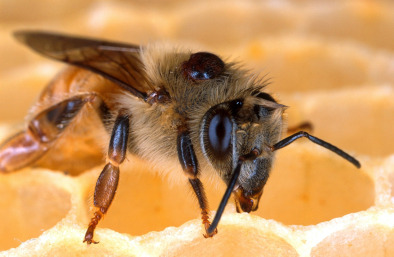 The disease was first discovered in 1904 on the island of Java by a wild bee, and was discovered by the Dutchman Jakobson. It was not until 1950 that it was first observed on a honey bee.

This disease is so widespread that it is present all over the world, and it was first diagnosed in our country in 1976.

The parasite is visible to the naked eye, dark brown in color, at first glance it looks like bee, but it is smaller than bee and has four pairs of legs, while bee has three pairs of legs. Female parasites live in spring and summer for two to three months, and in autumn and winter for six to eight months.


Varroa spreads very quickly, so that in just one year it can spread up to 60 km by air from one infected beehive.

Varroa is spreading in various ways, which is the main reason for its rapid spread. Drones are considered to be great carriers of varroa, because they move up to 16 kilometers away from the apiary, and they also enter other hives, in their own apiary or in the surroundings.

Predation can also contribute to the spread of varroa, then the transfer of frames with honeycombs and bees from one hive to another, the migration of bees from the infected area to the uninfected and vice versa, contact of worker bees when landing on the flowers of honey plants, etc.

It is believed that some other insects, for example bumblebees, wasps, hornets, and others, transmit varroa between the hives in the same apiary and from one apiary to another.


The reproduction of parasites begins in early spring, and with the appearance of brood in the bee colony. The female varroa lays eggs in honeycomb cells that already have hatched larvae, most often when the brood is 5-6 days old, which means just before the brood closes.

In one cell, a female varroa usually lays one to three eggs, and less often five or more. It all depends, first of all, on the degree of infection of the bee colony and the season, i.e. on the amount of brood in the bee nest.

The female lays eggs directly next to the larvae or on their body. In two days, the larvae hatch from these eggs, which transform into puppets by changing their clothes, and then into adult ticks. During the development in the brood, the varroa feeds very intensively on the hemolymph-blood of the bee brood, thus incapacitating them for normal development, life and work.

The whole development cycle from egg laying to hatching of an adult varroa lasts 8-10 days in females and 6 to 7 days in males. So, while the bee brood is developing, the whole development of the parasite takes place. After mating, the males die, and the fertilized female varroa remain on the already formed bees, drones and queen in the brood. And when they are hatched, varroa is present on them, they suck their blood, and then the whole cycle is repeated, so the varroa multiplies very quickly.

When there are no broods in the bee colony, there is no reproduction of this parasite. During the winter period, when the bee colonies are in the ball, i.e. when there are no broods, the tick does not reproduce, but its females still live, suck the blood of the bees, and thus disturb and damage them. They are usually found between the ankles at the bottom of the buttocks, on the left and right sides, sometimes also between the articles of the thoracic part of bees, drones and queens, and in the area of the wax mirror of worker bees.

It is very important to know that varroa develops much more favorably in the brood when the temperature is lower than 35 degrees Celsius. This is the main reason that the brood attacks far more drone brood than the worker bee brood, and the queen brood very rarely attacks. In the area of the drone brood, the temperature is somewhat lower, because this brood usually develops at the ends of the frames and a little further from the central area of the worker bee brood. One of the methods of fighting against varroa is based on this principle.